This is the thing I can’t get over. That the most practiced, ordinary intimacy between the now extinct thylacine and humans may have happened with this rug. The casual touching of the skin as hands pulled the rug over cold human knees. The absentminded stroking by adults. The intense, curious engagement by children until they too accepted and assumed the warmth of multiple thylacine skins stitched into a rug. This makes me frightened for other species. As if humans knowing them and even loving them will not save them from ‘us’. But ‘knowing’ a thylacine, scientifically, personally, with the best intentions and the worst was not enough, was not in the right order of thylacineness to prevent the human destruction of them.

What to feel about this rug? It is carefully made. Eight different thylacine skins have had their distinctive, beautiful striped backs removed and then sown together in an elegant mosaic with a scalloped edge and red baize backing. Robert Stevenson circa 1903 is credited with the making of the rug but I suspect a woman’s work. A buggy was an open, horse drawn vehicle so when one buggy passed another, the buggy rug would have been on prominent display. So was this rug a calculated bid for status? A mark of hunting and needlework skill?

Most of the animals killed to provide the pelts to make this rug came from the Upper Blessington area in northern Tasmania. From the comfort of our car it is easy to marvel at the sharp crags and rocky river crossings that break into the lush rolling hills of good looking farmland. But there is also a sense of anxiousness that the rich pasture and cropped hills are intimately entwined with the caught and killed thylacines.

Just beyond the shot up sign announcing Upper Blessington we choose a path that, according to our reading of the map, should take us over the hill and back to the highway (there is no reception to check with Google Maps). But what begins as a well-marked road becomes undone by the constant criss-crossing of logging tracks. The landscape shifts from man fern-filled, subtropical rainforest to the monocultural world of plantation pines and eucalypts. The dirt road develops wheel ruts with a higher and higher middle ridge with loose sides as if made only for trucks with elevated clearance and bulldozers. Finally we come to a kind of cul-de-sac with walls of stripped and cut logs and although we see that the track continues down the very steep side of this hill we no longer trust it.

We slowly fight our way back via another set on rough tracks to bitumen and highway. Losing our tracks to the demands of commercial logging makes me wonder how quickly the thylacines lost their way. For so long their tracks would have worked until their paths of belonging, their everyday foraging, did not end up anywhere at all. Or nowhere useful. And with nowhere to go back to. The buggy meanwhile would have been making tracks.  Tracks that shaped the land into ‘settled’ blocks connected by ‘communication’ lines.

Did any other thylacine see, smell that rug on those human knees? Did it figure for even a second that something familiar but terribly monstrous was moving across its land? Did that watching, near final, thylacine learn to take a different path? Not realising that the policies of eradication would be too pervasive, the promised price on its head too powerful to enable it to arrive anywhere alive for too long. Killed as a frightening pest, sewn together to warm the knees of the killers – now the skins are too precious for human eyes. Too easily damaged by even our looks. As if we could ever see really see what we did? 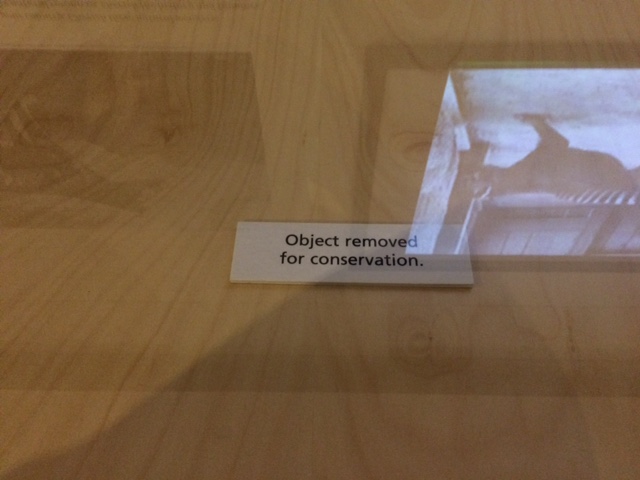 On display in this Tasmanian museum, the Queen Victoria Museum and Art Gallery, you can only see the whole rug in glimpses. The display light is on a timer to help preserve the colour and quality of the rug. The seeming casual excessiveness of eight (eight!) now extinct thylacine skins cut and organised by human hands for human comfort makes the sight of this rug a deeply unsettling experience. So is knowing the role of the museum in the killing and capturing of thylacines for collection and for exchange with other museums.

The thylacine, dead and alive became a currency of curiosity that built the standing of individual collectors, members of the Royal Society, directors of museums and the quality of this museum’s collection. The museum harvested the diverse values of the living thylacines and now preserves the remains. Remains made into precious, even prestigious remains through extinction. The on-again, off-again lighting draws you closer to the rug. This may be an anxious effect of that flickering light bringing forth some base memory that somewhere a bulb will blow.

The texture is alluring. Like any fur or hide there is a call to touch that is accentuated by the stripes as if their figuration matches in some way the tips of the human hand that could sketch out each stripe. But so many skins, so much death standing in for the ultimate death of all thylacines is also sickening.

It confronts our assumptions about the natural good of making use of available animals. It challenges the idea that if we kill an animal we should eat every bit of it, use every part of it. For these skins stripped of their bodies do not confirm that thinking. They suggest, ghastly unclothed ghosts walking the forests. They cry I think to go back.

Robert Stevenson of ‘Aplico’, who killed all these Thylacines (and many more) appears in the correspondence pages of newspapers in the 1890s agitating against the ban on opossum hunting but by the 1900s he has numerous public notices warning people off hunting on his property. We don’t know whether that was to preserve the animals on his property for his own hunting or because he wanted to save the animals themselves. By the time he dies in 1947 the last thylacine is already dead. The rug remains.