I love these images of coral reefs that the photographer, filmmaker and explorer, Frank Hurley,  took in 1922 on Lolorua Island and other islands close to Port Moresby in Papua New Guinea (#5, #6, #7). They say so much about the 1920s, about the deep fascination of artists and scientists in that decade with coral reefs and the underwater, and about human ignorance of coral reef ecologies. In the 1920s no one thought that within 100 years the planet’s coral reefs would face extinction. Instead, they symbolised unexplored geographies, unseen spectacles, and untapped resources for commercial gain. 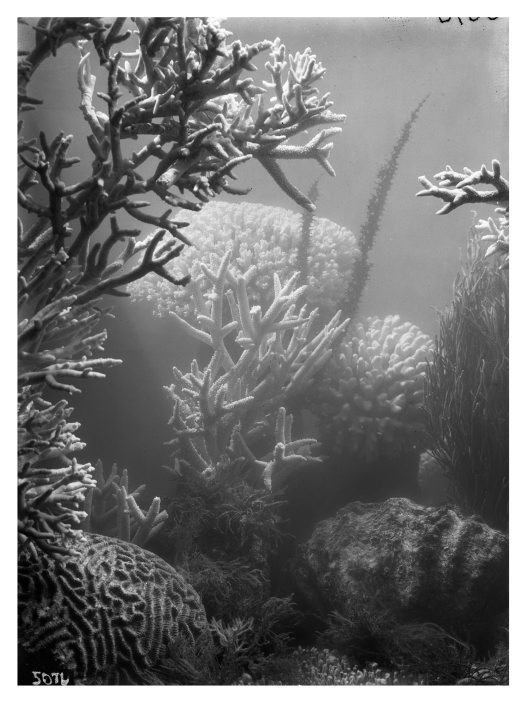 Frank Hurley and Allan McCulloch, an ichthyologist with the Australian Museum in Sydney, travelled with a party along the Great Barrier Reef, through the Torres Strait and up to the area then known as Papua. In those days the entire chain of coral reefs from Queensland to Papua was referred to as ‘The Great Barrier Reef.’ Hurley and McCulloch were on a picture-making and museum-collecting expedition.

Hurley had an aquarium built at Port Moresby, and then, according to diaries held in the National Library of Australia, a Papuan crew carried the tank by canoe to Lolorua Island so that Hurley could film and photograph fish and corals on the shore. His goal was to obtain exciting footage for a new iteration of his 1921 film, Pearls and Savages, a film that stands as possibly the earliest general release cinematic vision of the Great Barrier Reef. Hurley had been in the same region in 1921 and felt he needed to return to the reefs in 1922 to capture more arresting pictures. It was easier to bring the animals out of the water and photograph them in an aquarium than get under the water with a camera. In 1922, underwater photography was in its infancy, although Hurley did claim in 1921 that he was an experienced underwater photographer.

As the sun bore down on the aquarium, and the water temperature rose, as silt gathered and oxygen became depleted, the artist and scientist became increasingly frustrated by what they referred to as coral ‘slime’. Strands of slime made the water opaque and spoilt the picture. What was the stuff? Eventually they resorted to the most efficient way of keeping the tropical water crystal clear: they removed the living polyps from the limestone and bleached the skeletons in the sun.

What Hurley had captured through the glass front of the aquarium was living corals in the process of bleaching by expelling strands of zooxanthellae that clouded the tank’s water. The image in photograph #6 was a portent of things to come for the fate of the world’s coral reefs, subjected as they were over the next hundred years to human-induced global warming and climate change.